The world is crying out for more research into motility disorders including pseudo-obstruction. In the UK we have a small, but much needed, charity called the Pseudo Obstruction Research Trust (PORT). PORT raises awareness of CIPs and, crucially, funding for research. They have raised over £250,000 to date and have helped our understanding of motility disorders greatly. PORT was started by two amazing women, Sue and Sonia, after they met in hospital while their daughters were having treatment for CIPs. Sonia’s daughter Emily Jasmine Frost (21.03.03 – 07.05.05) passed away from complications of pseudo-obstruction aged only two whilst waiting for a transplant, and the charity was formed in her memory. Tragically, Sonia herself is now affected by the condition as a result of Ehlers-Danlos Syndrome and Inflammatory Bowel Disease and is very poorly. Their hard work and dedication is second-to-none and despite being a small charity they’re making a big difference.

PORT is helping to fund the new Paediatric GI Physiology Department at The Royal London Hospital. The GI Physiology Department is considered one of the centres of excellence in the diagnosis and management of motility disorders in the UK. It is one of the largest supra-regional referral centres for children with functional and GI motility disorders, accepting referrals from throughout the UK. The GI Physiology Unit is equipped with state of the art diagnostic equipment originally for adult use, as in their adult GI Physiology Unit, but these have now been adapted to be used in children. The Unit is one of a few centres nationally and in Europe that can apply these technical advances to adult and paediatric patients and more importantly, with the expertise in the diagnosis and management of GI functional disorders, thereby improving the patient’s quality of life. The Paediatric GI Physiology Department is led by Professor Daniel Sifrim, Dr Nigel Meadows and Dr David Rawat. PORT has also donated £24,000 to purchase two bespoke combined pressure-impedance catheters for the unit. The catheters allow simultaneous measurements of pressure (motility) and flow (impedance) in the stomach and intestine. These catheters will be used in research in children with suspected intestinal pseudo-obstruction, and will increase the understanding of gastrointestinal motility and transit in paediatric patients. Another of PORT’s donations have enabled the team at the Paediatric GI Physiology Unit to recruit a dedicated paediatric nurse. This nurse, Lucy, supports young patients and their parents during the investigations, and is a key worker in organising and documenting the department’s activity. She has now been with the team six months and has helped them restructure the department to be more child-friendly, resulting in them having two dedicated days in the unit every week. Lucy is currently performing 40-50 investigations per month.
PORT is also pleased to be funding a research project looking at the link between Ehlers-Danlos Syndrome and Chronic Intestinal Pseudo Obstruction by Professor Qasim Aziz, Professor Charlie Knowles and Dr Asma Fikree. Professor Aziz has been examining the link between joint hypermobility and gut problems and this research will greatly improve our understanding of how Ehlers-Danlos Syndrome (EDS) affects the gut and also improve our understanding of CIPs by looking at what exactly predisposes EDS patients to developing motility disorders and why.
I am pleased to be involved with the Pseudo Obstruction Research Trust and I hope to help the charity to continue to grow. This is local charity, based in Essex, and may be small but believe me, the impact they’re making is huge. All the money raised goes into benefitting patients, and they’re making a real difference. PORT needs your help to continue this good work; join in and supPORT the cause. Do a fundraising event, set yourself a personal challenge, leave a gift in your will, make a regular donation, anything you can think of – every penny counts. Thank you. 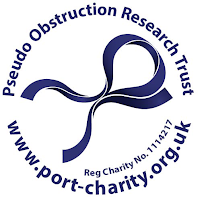