07591592097 lucy@lucy-watts.co.uk
In the New Years Honours 2016, I was appointed Member of the Most Excellent Order of the British Empire for my services to Young People with Disabilities. Then on Thursday 9th June 2016, I received my MBE in my Investiture at Buckingham Palace, presented to me by His Royal Highness The Prince of Wales. It is a huge honour to be appointed an MBE, especially given my young age, I’m only 22, and the fact that my period of work hasn’t spanned decades like many others. However, it’s highly unlikely that my life, and my work, will span decades, which makes it even more special to receive the Honour whilst I am at the peak of my work, and am still well enough and able to attend my investiture, and able to enjoy being a Member of the Order. It is a huge honour to be recognised for my work. My charity, health and disability work gives me a positive focus away from the pain, suffering and struggles I have as a result of my conditions, and the restrictions the conditions and their complications impose upon my life. To have something to focus on, a purpose in life and an ability to use my experiences – good and bad – constructively to benefit others, is very important and a key component of my coping mechanism. Being able to distract myself with my work, and at the same time, advocate for, represent and support others with chronic and complex conditions and disabilities is a great way to use my energy in a productive and worthwhile manner – however limited my energy may be on some days.
The build up to my Investiture wasn’t the best; I had three months very poorly with repeated bouts of sepsis and developed an infection in the build-up to the day of my Investiture itself, but nothing was going to ruin my very special day. I bought my dress and fascinator well in advance – a hat or fascinator is a requirement for an Investiture – and we planned the day with military precision, to make sure we had all the equipment, supplies and medication we needed, to make sure everything was ready and in order, and to make sure that we didn’t forget the tickets or any of the other documentation, or our photo ID. Nothing was going to prevent me attending or enjoying my special day, and what a special day it was.
We had a problem-free drive up to London in the car, arriving with an awful lot of time to spare. Eventually they started allowing us in. Driving through the Palace gates and into the forecourt was absolutely amazing, a very special feeling. We were greeted by staff who would help us throughout the day – I cannot fault their support and access for those in wheelchairs or with disabilities, they truly are second to none. Once out of our vehicles all recipients and our guests gathered in the lobby for a while before we went up a floor. I was then separated from mum, Grandma and my nurse, Faggie (sadly my sister Vicky was too poorly to come with us). They were taken to the Ballroom where the Investiture would take place, and I was taken to a very beautiful and decadent room full of paintings and with so much detail on the walls, where all the Honours recipients gathered. There I met and talked with a few of the very impressive and worthy recipients, who were very positively surprised and congratulating me on achieving an Honour at such a young age. I may even be able to help a fellow recipient to get the care package and equipment she needs for her husband to return home from hospital where he’s been for over a year due to the Scottish NHS not funding care packages like the one he needs as of the 1st April this year. I do hope I will be able to help.
The guests in the Ballroom were briefed, as were we recipients in our room, and then groups of recipients were taken through in groups of 15 to 20. We could watch the ceremony on a screen so we all knew what to do and make sure we didn’t make any mistakes! Then came my turn as I was called into the third group. We moved through the rooms of Buckingham Palace, and then moved through the back of the Ballroom where the ceremony takes place and into a room beside the Ballroom where we waited for our turn to go in, one by one, to be awarded our Honour by His Royal Highness, The Prince of Wales.

Finally it was my turn. I drove into the room a little way, on the spot where I was told to wait until I heard my surname called, whilst the person before me received their award. She received her award, then backed away from HRH Prince Charles, curtseyed and walked off to the other side. I then drove into the centre and turned and faced His Royal Highness, bowed my head, and drove up to the stage. Prince Charles stepped off the stage so he could put my MBE on the hook that had been placed on my jacket earlier in the day, and we talked for a few minutes. He asked me about my work, congratulated me and said my work is very impressive, that I must make a big impact and help a lot of people, said I must be proud of myself and to keep up the good work. He then complimented me on my wheelchair, saying “you’ve got the latest technology” and gestured to my chair, so we said a few words about that, before he held out his hand and we shook hands, he congratulated me once again on my impressive work and then I backed away, bowed my head, turned and drove out of the room. They then took the hook off my jacket and put my MBE medal in a box for me, and I sat at the back of the room with my family. Prince Charles was so lovely, there was no divide felt between us, and he was genuinely pleased about what I’ve achieved and very genuine; I was ever so slightly worried about what to say to him, but our brief conversation flowed so effortlessly that I needn’t have worried. It was a very special moment which I will remember forever. Not many people can say they’ve met the Royal family, let alone to have talked to, been given an award by and shaken the hand of the Prince of Wales. In a strange but lovely twist of fate, Sir Jack Petchey was Knighted at that same investiture; he set up the Jack Petchey Foundation who give awards and do other work with young people in London and Essex, and I myself was a Jack Petchey Award recipient back in 2010 for endeavouring through adversity and achieving good GCSE grades despite doing my exams at home in bed having been very poorly and having tuition at home for two and a half years, and being a positive role model. It’s a small world, and it was lovely to be able to thank Jack Petchey himself for his work and his foundation, of which I was supported and recognised by for my achievements.

It was a very poignant moment when the national anthem played at the end of the ceremony, though we weren’t allowed to sing along, and it made me feel quite emotional. It all started to hit me, what it meant, what had just happened, that I was part of the Most Excellent Order of the British Empire, and that people think me worthy of such an accolade. Not just my family, but the person who nominated me, I still do not know it was (if you’re reading this, you have no idea how grateful I am!), to the Cabinet Office for selecting me to receive an Honour, an MBE, out of (no doubt) thousands of nominees, which was then agreed by the Queen, and which I received from Prince Charles who was very impressed by my work and my achievements. It’s almost too much to process and take in, but my Investiture was a truly magical day and one myself, my mum and my Grandmother will never forget, nor will my nurse Faggie (who is the envy of the rest of my team of nurses!).
It’s a fitting end to what has been a horrific 13 months, from mum’s brain tumour diagnosis in April 2015, her post-operative brain bleed and stroke in May 2015, her amazing recovery from nearly not making it through the night and not knowing if she would ever recover, and if so, whether she’d still be ‘mum’ and how much she’d be able to do, and to her setback fifteen minute seizure in February this year and risk of further seizures meaning she must take anti-epileptic drugs for the rest of her life. Then there’s my own battle, from my massive deterioration physically, to the recurrent episodes of sepsis (and many, many infections I’ve had that haven’t led to sepsis), to multiple hospital admissions and to completely losing over three months of my life being unable to do anything, not even use my phone or be awake for long; it’s been really tough. It’s been a very hard, emotional, desperate, distressing and frightening year since mum’s diagnosis, the surgery and its complications and much as she is so much better, she’s not quite but as near as she can be to her normal self after what she’s been through, for which I am relieved and so grateful and overjoyed. However much as things have got better, it has had a lasting effect on me and I suffer nightmares most nights relating to mum’s seizure and which take me back to the feeling of finding out she had complications after surgery and might not make it. The last 13 months have just been horrendous in so many ways (though there are still positives, the negatives have outweighed and overshadowed them) and I am just glad my MBE has provided such a lovely way to sign off a terrible 13 months. Much as I have achieved things in this time, from the BBC Three documentary, to co-chairing the event at the Department of Health in December, to reaching 200,000 views on my blog and more, and grown as a person more than I ever could’ve had I not faced what I’ve faced, having had to do everything for myself such as doing all my own phoning, chasing, liaising, finances, organising, ordering and so on, which mum usually took care of, and to be cared for completely by people I’d not met prior to mum’s surgery, it’s been a very tough time and I just hope the next 12 months and beyond will be the best that it can be.
I have wonderful pictures to remember my Investiture by, some I will have to wait until they arrive from the company, others I have already purchased, but the images remain copyright to them so I can only use them for personal use and in talking about my MBE (“for news purposes”, as they put it). Here they are: 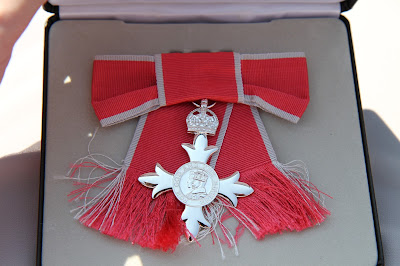